Posted by Craig Rubia in DPG News, Entertainment Means Something

Once upon a time, there was a toy bear named Winnie-the-Pooh. Actually, he’s still around thanks to a company called Disney. This little anthropomorphic teddy bear is well loved around the world and we would like to take this time to celebrate his creator’s birthday. 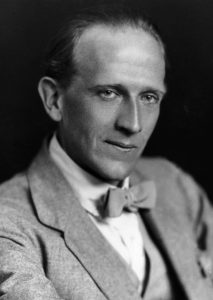 Alan Alexander Milne, pictured on the left, is better known as A. A. Milne. Born in London, England on January 18, 1882, Milne was an English humorist, freelance writer, and World War I veteran who was also a successful playwright achieving success with a series of light comedies in the 1920’s and 1930’s. But in our world, he is most famous for publishing popular stories of Milne’s son Christopher Robin and his toy bear, Winnie-the-Pooh.

In 1926, he published a collection of stories about the toy bear in a book called Winnie-the-Pooh. He followed up that success in 1928 with The House at Pooh Corner.

While the storyteller was Milne, an illustrator named E. H. Shepard brought “the silly old bear” to life with his characterization of Winnie-the-Pooh and other characters in the story including Piglet, Eeyore, Kanga, Roo, and Tigger. Milne also created from his imagination two more characters, Owl and Rabbit. Disney would later add Gopher to the family. You can read his 1939 autobiography It’s Too Late Now: The Autobiography of a Writer if you would like more personal take on his life. 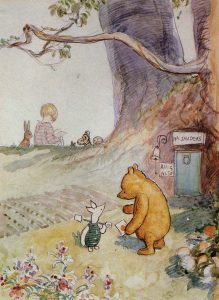 We hope you enjoyed our tidbit on the famous Winnie-the-Pooh creator in honor of his birthday!. Feel free to visit the links given throughout the text as we feel they’ll provide useful information pertaining to A.A. Milne and the beloved Winnie-the-Pooh.

Apologies in advance for our company plug! Visit DiscountPhotoGifts.com for the lowest priced photo gifts that you design – or our new Photo Canvas Only website TLPhotoCanvas.com where you can design your own gallery wrapped or floating frame photo canvas at wholesale pricing. Both offer a secure shopping experience. Here’s a 15% Off Promo Code: BLOG15. Thanks for looking!