Posted by Craig Rubia in Entertainment Means Something

It’s all about BBQ’s and picnics, wearing our best red, white, and blues attire, and celebrating our independence from the British monarchy some 240 years ago. But was it as easy as Hollywood might portray our struggle for independence? Probably not.

Most Americans are probably not aware of how uncertain the American Continental army and its leaders were of actually defeating the mighty British forces. History books in high school paint an abbreviated portrait of defeats and eventual victories and Hollywood puts an idealized face on most of the big screen epics. But just imagine an outnumbered American army being attacked by the mighty British navy on one end and being attacked with numerous ground troops on the other at the Battle of Long Island between August 27th and 29th 1776. After reading this cool blog post at 1776history.com, I discovered a renewed sense of appreciation for what had transpired during our war for independence.

As explained in the blog post, it was a matter of good luck and Mother Nature’s intervention that helped lead to the eventual independence from British rule. In what would be described as one of the largest battles of the revolutionary war, it was also pivotal to the success in defeating British rule. In March 1776, the British formulated plans to isolate New York and New England from the rest of the colonies.  Outnumbering the Continental Army almost 2-1 (32,000 to 19,000), the larger British force planed to land on Stanton Island. General George Washington moved much of his army across the East River from Lower Manhattan to defend Brooklyn. 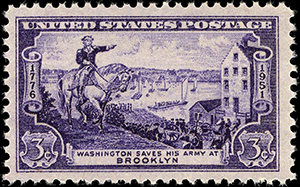 With the British attacking the patriots on three fonts on August 27, 1776, the outnumbered Americans were outflanked when the British sent a 10,000-man force through a little used pass. But as the article reads, a series of lucky events saved the American Revolution!

It took a small band of 400 Maryland fighters to save fight off the British that allowed a larger force of Americans to retreat to Brooklyn to avoid capture. The British General Howe stopped his attack and had his men surround the Americans to force their surrender while at the same time have their navy sail around and cut off the Americans from escaping across the river to Manhattan. So here comes (or not comes) Mother Nature’s intervention. The British ships never came because there wasn’t enough wind to push them there.

Finally, the event that would save the Continental Army from huge losses or capture occurred after Washington attempted to get 9000 troops safely across the East River under the cover of darkness. Their only foe would be the rising sun, which would expose their movements. But thanks to a heavy layer of morning fog, the soldiers were masked from the British army and escaped undetected. Mother nature had sided with the Americans. Even though the British went on to capture New York in September of 1776, they were not able to destroy the Continental Army and the Revolutionary War would continue and the eventual Declaration of Independence would be signed.

What a great reminder this is as to what it took to become an independent nation. Let’s celebrate together remembering the hard fought battles and sacrifices our forefathers endured and carry on the tradition of a safe and sane, BBQ and picnic, red, white and blue wearing Independence Day celebration.